Current and Past Funding Agencies

This project aims to provide a comprehensive investigation of middle-ageing (40-60 years old) in terms of neuronal, cognitive and well-being changes; and to trace in middle-age the onset of these changes, which may prevent cognitive and psychological issues characterizing late-life.

In this project, we will combine computational modelling with brain imaging methods to investigate the impact of everyday experiences such as emotion, motivation, and prior expectations upon learning.
Our goal is to discover how these everyday factors can alter the brain’s computations and create cognitive biases. We predict these biases affect how people assess the reliability of their own beliefs in comparison to incoming sensory evidence, changing what they decide to attend to and learn from. Ultimately, the project aims to achieve a mechanistic understanding of the neural computations subserving learning processes.

In this project we aim to provide a mechanistic understanding of how state anxiety – a psychological factor affecting real learning scenarios – influences
motor skill learning focusing on piano performance. If you want to participate in our behavioural or electroencephalography studies, contact us.

In this project we are investigating how factors, such as the perceived costs in a reward-based piano sequence learning paradigm, modulate decision-making and influence motor learning. If you want to participate in our behavioural or electroencephalography studies, contact us. 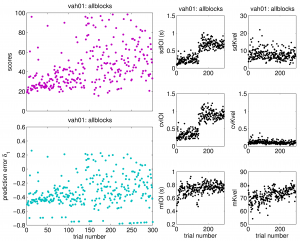 Funded by the Spanish Ministry of Education and Science during 2005-2006.

Funded by the Spanish Ministry of Education and Science during 2003-2005.

Measurement of the subject multiplicity in neutral current DIS and determination of αs at HERA.

Funded by the Spanish Ministry of Education and Science during July 2001.

Funded by the Universidad Autónoma de Madrid during 2000-2001.