Here together with the organisers and other speakers, while I try an amazing exoskeleton developped at Sony CSL! 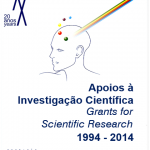